Rita Snyder has an attitude. She is head-strong, refuses to act her age and doesn't listen to her doctors. "Thank God," says her daughter, Susan Bleacher. "She is a survivor, a determined woman," adds Snyder's son, Charles "Chip" Snyder Jr.

One of the first things you notice when meeting Rita is her broad, child-like grin. She radiates more joy in an instant than some do in a lifetime. Maybe it's because she's got nothing left to fear.

Rita has had a number of close calls in her 84 years, none of which have dampened her spirit or diminished her joie d? vivre. "Mom is just not a quitter," Chip explains. "She always looks at the glass half-full, not half-empty."

Fourteen years ago, doctors discovered a malignant tumor on Rita's right kidney. "She just felt something there," says Susan. She had the tumor removed surgically, along with her kidney.

"She was lucky," explains Susan, in that "she didn't (also) require chemo or radiation."

But, as luck would have it, in 2002, her remaining kidney started failing. Today, she undergoes dialysis three times a week-as she has every week for the past eight years. Even on vacation. "We've been on three Dialysis-at-Sea cruises since then," says Susan.

Nothing stops her from living her life to the fullest.

In 2003, Rita was a passenger in what at first appeared to be minor car accident. When the ambulance arrived at the scene, Rita asked them to drive her back to her car. They, of course, refused, transporting her instead to the hospital, where she underwent emergency surgery to have her spleen removed.

Turns out her cane had severed her liver and ruptured her spleen. Post-surgery, she had to use a colostomy bag.

Months later, she asked to have her colostomy reversed. While the procedure itself was successful, "everything in my body went haywire for the next five or six months," recalls Rita. They had me dead and buried."

Her health rapidly declined, and doctors told her that she didn't have many options left. She spent months on a ventilator in the hospital. They offered her hospice care. "My mom just looked at them, remembers Sue". Rita asked if she would get dialysis in Hospice, and they said 'No', so she answered, "I don't want to go to Hospice".

They told her she'd never get off the ventilator. She told them, "it's your job to do that, figure it out". "She's tough," declares Susan. "We had doctors come up and apologize (for writing her off)," Chip says. "They told us she was one of the rare zero percent of people who got through it. Most people wouldn't endure what she did."

"They call her the miracle woman," Susan adds.

Every year, Celebration for Life honors a cancer survivor who emanates a positive spirit and serves as a role model for others facing adversity. It was an easy decision to select Rita Snyder as this year's Guest of Honor.

As our 2009 Guest of Honor, Celebration for Life will donate $1000 in Rita's honor to the charity of her choice. She has selected St. Jude's Children's Hospital.

Rita is a resident of The Glen at Willow Valley. She grew up in Lancaster, where she graduated from Lancaster Catholic High School and worked at Armstrong for several years. Rita was the secretary to the station manager at WGAL-TV before leaving her job to raise a family with her husband of 50 years, the late Charles F. Snyder.

In a word, Rita's a survivor. And those who know her best believe she has more than nine lives. If she has anything to do with it, I wouldn't doubt it for a second.

* Excerpts pulled from 'They had me dead and buried'; Rita Snyder proves the doctors wrong – published Monday, January 5, 2009, in the Lancaster Intelligencer Journal. 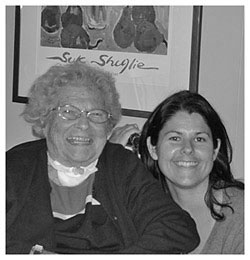